Sunset in the Chincoteague Refuge

We drove into the Refuge
My fellow photographers and me
Excited to see what we would see
The bright, clear, blue November sky before us

Hundreds and hundreds of swans swam through the water
Filling my field of vision with a field of white
They would swim a while, then sit a while
Then move between and around the geese that shared the water with them
The green trees in the background creating arches over the birds and the water
Quiet, peaceful – well, except for the cacophony of sounds that birds make


And then – POOF – suddenly they lifted up together
Flying almost as one – to the other side of The Refuge
Who knows why – what called them to leave their place of refuge?
We followed, again and again
Around and around The Refuge we drove
But – no surprise – the birds moved much faster than we could 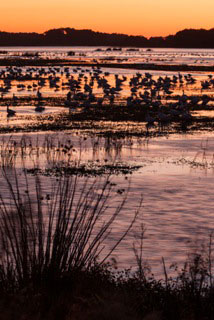 Finally, I just stopped and waited on the far side of The Refuge
I waited and hoped they would come my way
Soon, the beautiful creatures rewarded my patience
Flying toward me, like tiny dots in front of my eyes
They came closer and closer and got bigger and bigger
They zipped up and down, sideways, alone and together

After a while, the sun began to set in a brilliant ball of fire
The sea grasses started to go dark as the sun fell ever lower into the sky
The glow from the fading sun lit up the water and the sky
The swans and the geese flew back and forth before my eyes
Their wings flapping madly

But then – they held their wings out wide, gliding first in one direction and then the other across the darkening sky
Soaring higher and higher, this way and that
And then they came closer again
Sometimes folding their wings beneath them and landing softly in the now-black sea grasses 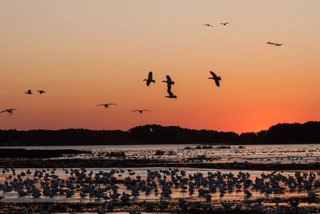 I stood, mesmerized, snapping photos madly
But then, overwhelmed with the beauty, the magnificence of nature and the scene before me
My fingers fell from the shutter
And I just watched
Letting the beauty of the moment engulf me
In its arms

The sky turned pale orange, then gold, then light blue, darker blue and, finally, purple
Silhouetting the birds in its brilliance
I had chills, not from the cold temperature
But from the magnificence of the moment
And the joy of being part of it

by dee ellison, photographer
November 2009
One week before Hurricane Ida devastated The Refuge
I hope the birds are ok